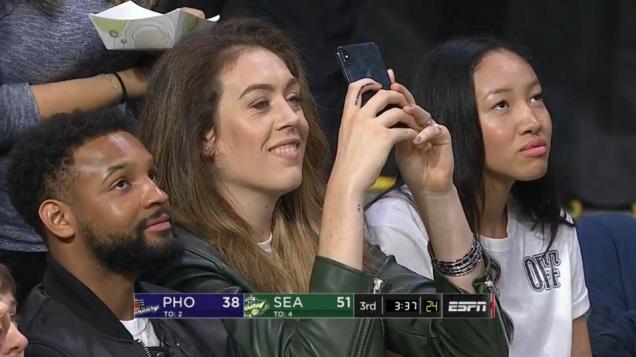 The Seattle Storm are a little over a quarter of the way through the 2019 WNBA regular season, having compiled a 5-4 record through their first nine games.

Seattle’s hopes of successfully defending its 2018 championship appear slim, but the bar for success changed drastically when Breanna Stewart was lost for the year to a ruptured Achilles. Then came Sue Bird’s knee surgery that has delayed her season debut indefinitely.

Forget winning a title; just reaching the playoffs would be an achievement.

Not only are the Storm on track to make the postseason, they’re a game behind the second-seeded Chicago Sky. Perhaps some regression is in the offing and Seattle will slip down the WNBA standings. For now, we can enjoy what has been an unexpectedly positive start.

Replacing One MVP with Another

No player is more responsible for the Storm’s winning record than Natasha Howard.

In her first year with Seattle, Howard assumed a larger role than she ever had with the Indiana Fever and Minnesota Lynx and took a huge step forward. She was a first-team All-Defensive Player and the WNBA’s Most Improved Player.

Without Stewart serving as the fulcrum of the offense, Howard has found yet another level to her game in order to fill that void. She’s averaging 19.6 points, 9.2 rebounds and 1.4 blocks, and she’s fourth in win shares (1.5), per Basketball Reference.

Especially with their point guard depth depleted, there are times when the Storm’s offense amounts to putting the ball in Howard’s hands and watching her make something happen.

According to WNBA.com, she made 48 unassisted shots for the entirety of the 2018 season. That number is already up to 28 through nine games. Her usage rate has also climbed from 22.4 percent to 30.3 percent, per Basketball Reference.

There have been some bumps in the road in terms of Howard’s efficiency. She’s shooting 46.2 percent from the field—down from 54.7 percent in 2018—and she’s 3-of-21 on three-pointers.

That comes with the territory when defenses can focus more of their attention on stopping Howard inside. She doesn’t have Bird finding her open on the perimeter, either. Howard has a .325 adjusted field-goal percentage in catch-and-shoots this year compared to .476 in 2018. To further illustrate Bird’s impact, a whopping 85.7 percent of Howard’s catch-and-shoots were unguarded a year ago and have fallen to 50 percent.

We all knew Howard was talented after watching her become a key figure for Seattle during its championship run. The generally seamless transition she has made from supporting star to unquestioned No. 1 scoring option is something we couldn’t have seen coming.

Unlike Howard, Jewell Loyd hasn’t really stepped up in Bird and Stewart’s absence and actually gone backward after reaching her first All-Star Game in 2018. Almost all of the gains she made have evaporated.

Loyd is averaging 15.9 points, 3.3 rebounds, 3.1 assists and 1.9 steals while shooting 37.5 percent from the field and 30.0 percent from beyond the arc. Almost across the board this is her worst statistical season since her rookie year in 2015.

Like Howard, Loyd’s efficiency is suffering without the benefit of having a dynamic playmaker to find her open on the perimeter or a high-volume scorer who constantly demands the defense’s attention.

Loyd turned herself into an off-ball scorer to great effect in 2018. Her three-point attempt rate skyrocketed to 42.1 percent after never going higher than 29.2 percent in her first three years, according to Basketball Reference. Catch-and-shoots accounted for 29.1 percent of her total field-goal attempts as well.

In 2019, Loyd’s three-point rate has slipped back to around its previous level (29.4 percent) and catch-and-shoots (23.5 percent) account for a slightly lower part of her scoring repertoire.

Unable to do as much damage from the perimeter, Loyd isn’t attacking the basket more. Instead, she’s settling for mid-range jumpers. A little over 32 percent of her shots came in the restricted area or the paint in 2018, with 25.8 percent coming in the mid-range. Those numbers are 30.9 and 39.7 percent, respectively.

Considering she’s a 93.5 percent free-throw shooter, it continues to be confounding how Loyd is averaging just 3.4 foul shots. More of this, please, Jewell.

Stewart’s and Bird’s injuries came with one silver lining: Jordin Canada and Mercedes Russell would see more playing time without having to deal with the scrutiny inherent on a team with title aspirations. The pair have far exceeded expectations in their second seasons.

Canada averaged 7.2 assists and 3.7 turnovers per 36 minutes while shooting 35.7 percent from the field and 18.2 percent from beyond the arc, according to Basketball Reference. Her defense was exactly as advertised as she had the best defensive rating on the team (92.6) and finished in the top 12th percentile in defensive points per possession (0.754), per Synergy Sports.

Those numbers warrant some context, though. Last year, Canada played primarily against opponents’ second units, whereas this year she doesn’t have that luxury. Some statistical decline is to be anticipated in those circumstances.

Canada’s shooting has actually improved, too. She’s knocking down 37.2 percent of her shot attempts and 25.0 percent of her three-pointers. Those numbers aren’t ideal but encouraging nonetheless.

In short, Canada is adapting well to an increased role and giving Seattle every reason to trust her as the long-term option at point guard. Her steps forward are great and not altogether unexpected.

Russell, on the other hand, has essentially been found money for the Storm.

Russell left Gary Kloppenburg no choice but to move her into the starting lineup based on her performance, with Crystal Langhorne getting bumped back down to the bench. The 23-year-old is averaging 7.6 points, 6.2 rebounds and 0.4 blocks.

We shouldn’t be completely taken aback by the progression in Russell’s offensive game. In her final year at Tennessee, she shot 58.3 percent from the field and averaged 15.3 points. She was a consistent, efficient scorer inside.

But plenty of productive college stars have fallen by the wayside. The work Russell has done to avoid that outcome is evident.

Rather than relying solely on her 6’6″ frame to out-muscle opponents inside—something that can work in college but won’t in the WNBA—she uses her height to complement what is a growing array of post moves. It doesn’t matter who’s guarding her. If she can successfully seal off her defending, the chances are good she’s going to score.

The biggest concern around Russell was whether she had the athleticism to operate away from the basket, be it on defensive switches or when running the pick and roll. It’s something even elite centers like Brittney Griner and Sylvia Fowles have to battle; they’re just so good at everything else it doesn’t really matter.

According to Synergy, Russell has made all six of her shots when getting the ball as the roller in the pick-and-roll.

On defense, Russell can still get exposed a bit against quicker guards but holds her own.

When Stewart is healthy, Russell will obviously move down to the bench. Bringing her on with the second unit will be a huge bonus for Seattle.

Playing to Your Personnel

The Storm rank fifth in defensive rating (96.6), which isn’t far off from where they were relative to the rest of the league in 2018 (third, 99.3). Offense is where Seattle is having the most trouble. The team is seventh in offensive rating (96.6) after finishing second (108.5) last season.

Who would’ve thought taking away Bird and Stewart would hurt the Storm’s offense?

Through the first few games you questioned why the Storm weren’t taking more long-range shots. Then you realized Gary Kloppenburg was largely doing it out of self-preservation. Seattle simply can’t stretch the floor as much with the roster it’s running with at the moment.

Loyd, Howard, Alysha Clark, Sami Whitcomb and Kaleena Mosqueda-Lewis are all good shooters. With only one traditional point guard—who’s not even healthy at the moment—getting them the ball for scoring opportunities isn’t easy.

The Storm led the league in assist-to-turnover ratio last year (1.58) and sit eighth (1.17) to open this year. They’re also 10th in assists (17.1 per game). Because they can’t move the ball as well in the half court, they have to hammer teams inside, either through dribble drives or post-ups. Slightly more than a third (35.4 percent) of Seattle’s field-goal attempts were inside eight feet of the basket in 2018. That figure has risen to 44.0 percent.

As an offshoot of that, the Storm are unable to hurt teams in transition like they were with Bird leading the break. Seattle is eighth in fast-break points, averaging 8.1 per game, despite ranking fourth in defensive rebounding rate (68.2 percent). The team is seemingly getting a good number of chances to get out in transition yet can’t fully capitalize.

With Dan Hughes returning for Friday’s game against the Los Angeles Sparks, the Storm might get back to what worked in 2018. It’s equally plausible this is what the coaching staff has to do with the players at its disposal.