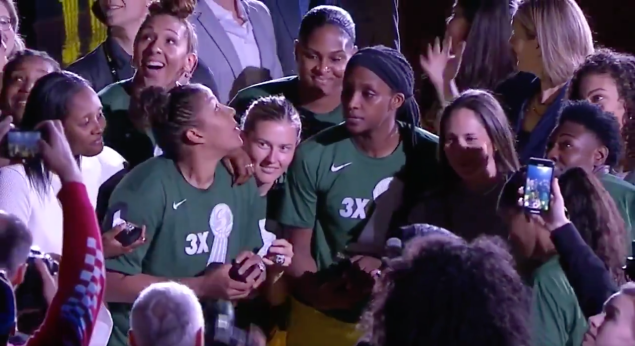 I’ve written this post a dozen times in my head, attempting to craft the perfect way to grab the reader’s attention. Finally I said screw it, and this was the best I could come up with.

Being open with my emotions isn’t something that comes easily for me. For whatever reason, I’ve considered stoicism a virtue and vulnerability a weakness, at least for the purposes of my internal psyche. Also, you can’t be hurt if you don’t allow yourself to feel things in the first place. (this is where I’d insert the guy pointing to his head meme)

Anybody who knows me would probably find a level of irony in me pouring my heart out to complete strangers, as I’m about to right now. Of course, if they saw the site’s analytics, they’d know nobody is going to read this anyway.

At least typing it all out feels cathartic on some level.

Note: This will eventually be about basketball, I promise.

END_OF_DOCUMENT_TOKEN_TO_BE_REPLACED

The Seattle Storm are a little over a quarter of the way through the 2019 WNBA regular season, having compiled a 5-4 record through their first nine games.

Seattle’s hopes of successfully defending its 2018 championship appear slim, but the bar for success changed drastically when Breanna Stewart was lost for the year to a ruptured Achilles. Then came Sue Bird’s knee surgery that has delayed her season debut indefinitely.

Forget winning a title; just reaching the playoffs would be an achievement.

END_OF_DOCUMENT_TOKEN_TO_BE_REPLACED

The Loyd giveth and the Loyd taketh away. That basically sums up Jewell Loyd’s first three seasons in the WNBA.

Through three games last year, Loyd was averaging 26.0 points and shooting 57.7 percent from the field, including 61.5 percent from three-point range. Sure, it wasn’t a large sample, but it was enough to raise hope Loyd was on the cusp of a breakout.

Instead, the 2015 No. 1 overall pick finished 2017 averaging 17.7 points and hitting 43.1 percent of her shots. Loyd didn’t necessarily have a bad year, but one couldn’t help wonder whether she still had another level to reach—one where she could be an All-WNBA guard.

END_OF_DOCUMENT_TOKEN_TO_BE_REPLACED

Where do you realistically set expectations for a team coming off back-to-back playoff appearances but still hasn’t had a winning season since 2011?

“It’s time to start winning,” Breanna Stewart said during the Storm’s media day, per the Seattle Times‘ Percy Allen. “I don’t want to come off as crass or cocky or anything like that, but losing sucks. It does. That’s just how I feel about it. And, no, I won’t ever get used to it. I can’t. That’s not how I’m wired.”

The Storm certainly intimated as much, too, when they hired Dan Hughes. They could’ve opted for a first-year head coach who would need a few seasons to grow into the role. Instead, Seattle chose a 16-year veteran who has the third-most wins (237) of any coach in WNBA history.

It’s not a title-or-bust kind of season for the Storm, but 18-20 wins are probably the minimum requirement to avoid another disappointing campaign.

END_OF_DOCUMENT_TOKEN_TO_BE_REPLACED

Nothing screams excitement more than hiring a coach you coaxed out of retirement.

That’s exactly what the Seattle Storm did when they announced Dan Hughes as their next head coach, which the Associated Press Doug Feinberg reported late Tuesday night. The team confirmed the hiring Wednesday.

“In conversations with Alisha and the Storm ownership group, it quickly became evident that this was a good fit,” Hughes said in the Storm’s official press release. “Beyond the incredible talent Seattle has on its roster, I am very excited to have the loyal fan base supporting us. In watching the team over the years, coaching against Storm teams, it’s been clear that the fans in Seattle create an advantageous home court at KeyArena and have been a huge part of the evolution of their storied success.”

It’s easy to see the Storm’s reasoning in selecting Hughes.

The 62-year-old boasts a wealth of experience in the WNBA, having coached the most games (524) in league history. His 237 wins are third only to Mike Thibault and Brian Agler as well. Over a career spanning 16 years and three franchises, Hughes led his team to the playoffs on 10 occasions, including a WNBA Finals appearance with the San Antonio Stars in 2008, where the Stars got swept by the Detroit Shock.

Plus, he’s an Ohio native, like Agler—M-Town represent—which is always an admirable quality. In fact, you know who else is from Ohio and would’ve been a great fit? Katie Smith, but we’ll get to that in a little bit. END_OF_DOCUMENT_TOKEN_TO_BE_REPLACED

When the Seattle Storm announced Gary Kloppenburg would replace Jenny Boucek as head coach, it was seemingly a stopgap move to get the team through to the end of the season, at which point general manager and team president Alisha Valavanis could launch a full coaching search.

Since Kloppenburg assumed the reins, though, the Storm are 4-1. Whereas missing out on the playoffs seemed a genuine threat, Seattle is comfortably inside the top eight and looking like a dangerous matchup in the first round. And with each win, the case to make Kloppenburg the permanent replacement grows stronger.

END_OF_DOCUMENT_TOKEN_TO_BE_REPLACED

I started working on this before going to work Thursday afternoon, and while I was working, the Seattle Storm went ahead and fired Jenny Boucek, naming Gary Kloppenburg as the interim replacement.

As a result, this transformed from an another airing of grievances with the Storm’s direction into a treatise about what went wrong for Boucek.

During a 2017 season that has been disappointing in virtually every facet for the Seattle Storm, the team’s lack of offensive adventure is one of the most underwhelming aspects and arguably most justified Boucek’s firing. END_OF_DOCUMENT_TOKEN_TO_BE_REPLACED

The Seattle Storm maintained the status quo through the WNBA trade deadline, failing to capitalize on their last opportunity reinvigorate what has been an underwhelming 2017 season.

One can understand general manager Alisha Valavanis’ desire to avoid being too reactionary following the team’s 10-13 start. Things are bad enough as is; making a shortsighted move would only compound matters.

At the same time, this past weekend demonstrated that something is fundamentally broken with the Storm. END_OF_DOCUMENT_TOKEN_TO_BE_REPLACED

The Seattle Storm’s hopes of turning things around in the second half of the season may rest largely on the decision-making of Alisha Valavanis.

The 2017 season hasn’t gone according to plan at all for Seattle. The Storm are ninth in the WNBA with a 9-12 record, and many of the team’s biggest problems from last year have carried over to this season.

A vote of confidence from ownership and the front office is often an empty gesture that is eventually undercut by the team’s actions at a later point. With that said, Valavanis didn’t even bother to offer the bare minimum regarding whether management was behind Boucek.

“I would say that I am working closely with our head coach on how we can recalibrate, how we can do everything possible to make a playoff run,” she said to Megdal. “That’s how I feel, and that’s where we’re at. I’m actively working with Jenny to see if we can make any adjustments to calibrate this for a playoff run, which has been set as a very clear goal.”

Short of having security physically carry Boucek out of the office, it’s hard to imagine a more damning response from Valavanis. END_OF_DOCUMENT_TOKEN_TO_BE_REPLACED