You might think you are in control when you take a 19-point lead on the Seattle Storm. Alas, you have merely fallen into Dan Hughes’ well orchestrated plan.

Many people (myself included) left the Storm for dead at halftime. A late layup by Breanna Stewart made it a 15-point game in favor of the Minnesota Lynx, who were seemingly scoring at will inside with Sylvia Fowles. This was two days after the Las Vegas Aces pounded Seattle for 48 points in the paint, and the same story appeared to be playing out Tuesday.

But a second-half surge, including a 37-point fourth quarter, propelled the reigning WNBA champions to a 90-78 victory on the road. Jewell Loyd, Jordin Canada and Sue Bird combined for 60 points to compensate for Stewart’s off night. The team combined to go 12-of-25 from beyond the arc, claiming a 21-point edge in three-point shooting.

To borrow the soccer cliche, this was truly a game of two halves.

END_OF_DOCUMENT_TOKEN_TO_BE_REPLACED

Three days after beating the Las Vegas Aces 97-83 in their 2021 WNBA season opener, the Seattle Storm will be back in action against the 2020 runners-up.

The curtain-raiser couldn’t have gone much better after a shaky start for Seattle. Early into the first quarter it appeared as if the Storm would struggle to handle Las Vegas’ frontcourt combination of A’ja Wilson and Liz Cambage. While Wilson ultimately finished with 24 points, her efforts proved to be futile as Seattle buried the Aces under a barrage of three-pointers.

As great as the defending WNBA champions looked, fans would be wise to recall the team’s start to the 2018 season. The Storm fell to the Phoenix Mercury in their opener before earning a 16-point win three days later en route to standing tall at the end of the year.

Saturday was a reminder of why Seattle could potentially lift another title despite losing Natasha Howard and Alysha Clark in the offseason. The discourse could shift a bit if the Aces bounce back with a comprehensive win Tuesday. Here are some storylines to watch.

END_OF_DOCUMENT_TOKEN_TO_BE_REPLACED

This offseason, the Seattle Storm decided winning a WNBA title had simply become too easy and that it was time to raise the level of difficulty. That’s the only explanation, right?

By almost any measure, the Storm endured a tough offseason, one that left the roster weaker than it was when Seattle was celebrating a second Finals win in three years. Natasha Howard and Sami Whitcomb were traded to the New York Liberty, while Alysha Clark signed with the Washington Mystics.Kennedy Burke, Candice Dupree, Mikiah Herbert Harrigan and Stephanie Talbot arrived in their place, with 2020 first-round draft pick Kitija Laksa making the jump to the WNBA as well.

Perhaps team president Alisha Valavanis and first-year general manager Talisa Rhea could’ve been more aggressive in making short-term moves to put the Storm in as strong a position as possible to successfully defend their title. With a number of key players due to hit free agency, though, it didn’t make sense for Seattle to tie its hands financially.

Last year, the Storm were just better than everybody else. Their .818 winning percentage was the second-best in franchise history. Especially with a number of notable players across the league absent, Seattle had too much talent and too much depth to get seriously tested when it mattered. The team swept the Minnesota Lynx in the semifinals before winning three straight games over the Las Vegas Aces, who had 2020 MVP A’ja Wilson, by double digits in the WNBA Finals.

END_OF_DOCUMENT_TOKEN_TO_BE_REPLACED

Tiger Woods won the 1997 Masters by the largest margin ever less than a year after becoming a professional. Later that season, he was victorious in the Byron Nelson Classic. He was 21 and poised to dominate the PGA Tour.

Instead, Woods decided to totally revamp his golf swing. While that meant taking a step backward in the short term as he figured things out, it laid the groundwork for one of the most dominant stretches in the sport’s history. By tweaking his swing to emphasize control over power, Woods perfected his game and ensured he would continue to stay miles ahead of the competition. If he doesn’t think proactively, then the Tiger Slam probably never happens.

Having already lost Alysha Clark to free agency, Seattle traded Natasha Howard to the New York Liberty for the No. 1 pick in the 2021 WNBA draft, the Phoenix Mercury’s 2022 first-rounder and the Liberty’s 2022 second-rounder. The Storm flipped the No. 1 pick to the Dallas Wings for Katie Lou Samuelson and a 2022 second-rounder while simultaneously sending the Phoenix pick to the Minnesota Lynx for Mikiah Herbert Harrigan. Sami Whitcomb also went to the Liberty in a sign-and-trade for the rights to Stephanie Talbot.

END_OF_DOCUMENT_TOKEN_TO_BE_REPLACED

The Seattle Storm hanged on to beat the Atlanta Dream 93-92 on Thursday night, and one rookie has the WNBA abuzz coming out of the game.

Yes, Ezi Magbegor hit the first three-pointer of her WNBA career, leaving her only 1,116 short of breaking Diana Taurasi’s all-time record. With as quickly as Ezi is progressing, don’t be surprised if she surpasses that mark by her fourth season.

Breanna Stewart had a team-high 27 points and eight rebounds in the victory, while Jewell Loyd chipped in 20 points in what was a shaky shooting night.

The Storm simply didn’t have a solution for Chennedy Carter, who finished with 35 points. The Dream guard is undoubtedly the favorite to finish runner-up to Ezi in the 2020 Rookie of the Year race.

END_OF_DOCUMENT_TOKEN_TO_BE_REPLACED

The Seattle Storm improved to 2-0 with a comprehensive 90-66 win over the Minnesota Lynx.

Breanna Stewart posted her first double-double (18 points, 10 rebounds) of the young season. Sue Bird (16 points) was the only other player to score in double figures. Everybody who saw the court for Seattle made at least one field goal to underscore what was a balanced offensive showing.

The Lynx didn’t have that luxury, partially due to injuries. Karima Christmas-Kelly (ankle) and Lexie Brown (head) both left the game before it concluded.

Napheesa Collier, Damiris Dantas and Sylvia Fowles combined for 44 points, but Minnesota’s support beyond that was lacking.

END_OF_DOCUMENT_TOKEN_TO_BE_REPLACED

The Seattle Storm opened the 2020 WNBA season with an 87-71 victory over the New York Liberty on Saturday.

Breanna Stewart and Sue Bird returned to the starting lineup after missing all of 2019. The WNBA also welcomed one of the most heavily hyped rookies in recent memory: Ezi Magbegor. Morgan Tuck’s Storm debut will have to wait as a knee injury kept her on the bench for the entirety of the 40 minutes.

In what might become the norm for her given her supporting cast, Sabrina Ionescu filled up the stat sheet but had a day to forget in her WNBA introduction. The Liberty as a team shot 34.8 percent from the field and 21.4 percent from beyond the arc.

END_OF_DOCUMENT_TOKEN_TO_BE_REPLACED 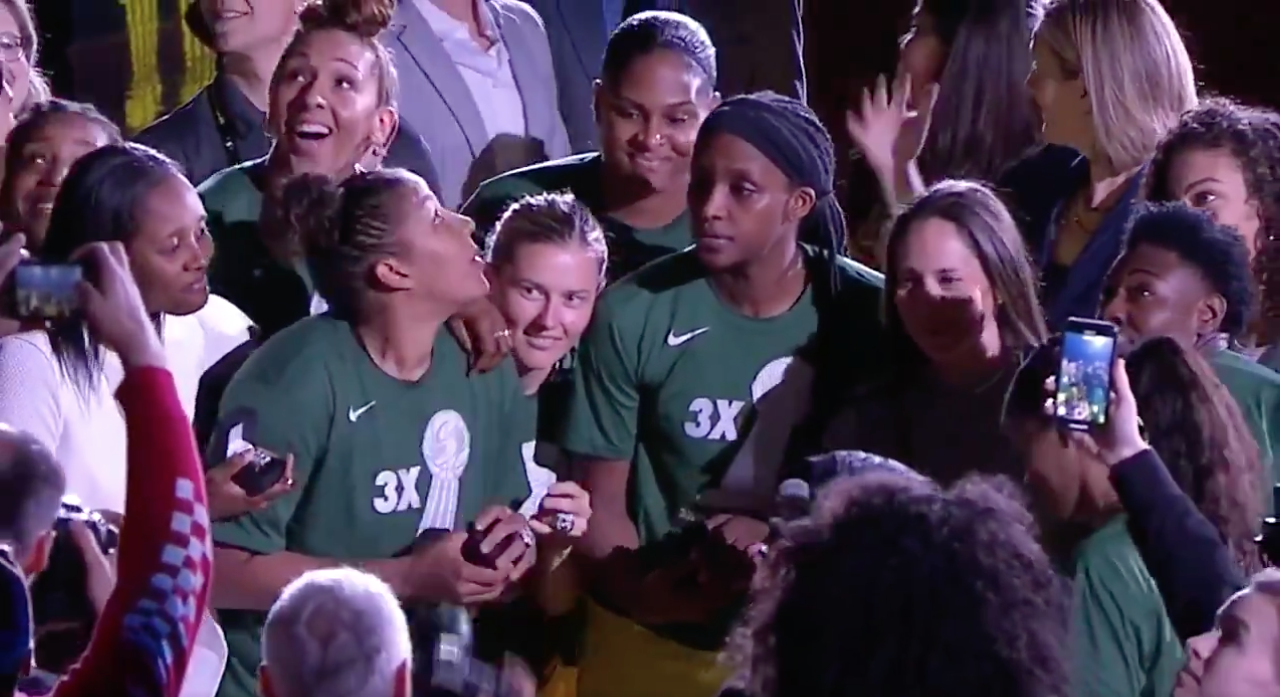 I’ve written this post a dozen times in my head, attempting to craft the perfect way to grab the reader’s attention. Finally I said screw it, and this was the best I could come up with.

Being open with my emotions isn’t something that comes easily for me. For whatever reason, I’ve considered stoicism a virtue and vulnerability a weakness, at least for the purposes of my internal psyche. Also, you can’t be hurt if you don’t allow yourself to feel things in the first place. (this is where I’d insert the guy pointing to his head meme)

Anybody who knows me would probably find a level of irony in me pouring my heart out to complete strangers, as I’m about to right now. Of course, if they saw the site’s analytics, they’d know nobody is going to read this anyway.

At least typing it all out feels cathartic on some level.

Note: This will eventually be about basketball, I promise.

END_OF_DOCUMENT_TOKEN_TO_BE_REPLACED

Maybe the 2020 WNBA season starts, maybe it doesn’t. We here at Witty Weather Pun are nothing if not adaptable. That’s why we launched the Witty Weather Pun Film Series, where we break down the skills of the antagonists and any important ancillary characters in what we deem to be basketball moves. Today, we’re examining Double Teamed.

OK. Can we take a moment to ponder how Disney expected us to think these two were twins?

Disney obviously wasn’t going to break the bank and use the revolutionary Parent Trap technology to put two versions of one actress in the same scene. And finding identical twin actresses wouldn’t have been easy.

Now that that mini-rant is out of the way, let’s talk hoops.

END_OF_DOCUMENT_TOKEN_TO_BE_REPLACED

The less said about our present situation the better. Apparently medical professionals haven’t thought to reach out to Breanna Stewart because I can’t be the only one who thinks Stewie could develop a vaccine for COVID-19 if she put her mind to it.

The WNBA is still holding its draft despite the ongoing pandemic and has yet to make any decisions about the 2020 season. The league faces fewer logistical hurdles by virtue of its smaller size, but if we’re being honest, it’s hard to envision how we get to see the WNBA this summer.

In an effort to continue generating #content and provide an entertaining diversion, I will examine basketball movies. And by “basketball movies,” we’re talking a film that features basketball in any form. Should this pandemic go on long enough, I will absolutely consider Catwoman to be a basketball movie.

Reach out on Twitter (@JosephZucker) or in the comments with any suggestions.