The Seattle Storm promoted Rhea to general manager in April 2021, by which time the team had already executed their biggest offseason moves. While she had been the assistant GM under Alisha Valavanis since 2019, she hasn’t yet had the opportunity to truly leave her imprint on the roster.

That will change this winter.

The Storm’s official roster at the moment is a bit sparse.

This was likely entirely by design based on Seattle’s offseason business in 2021. The team didn’t re-sign Alysha Clark and traded the pair of Natasha Howard and Sami Whitcomb, both of whom were free agents, to the New York Liberty. While that hindered the Storm’s chances of successfully defending their WNBA title, it cleared the deck for 2022, when they had a slew of players out of contract including Breanna Stewart, Jewell Loyd, Mercedes Russell and Jordin Canada.

END_OF_DOCUMENT_TOKEN_TO_BE_REPLACED

Three days after beating the Las Vegas Aces 97-83 in their 2021 WNBA season opener, the Seattle Storm will be back in action against the 2020 runners-up.

The curtain-raiser couldn’t have gone much better after a shaky start for Seattle. Early into the first quarter it appeared as if the Storm would struggle to handle Las Vegas’ frontcourt combination of A’ja Wilson and Liz Cambage. While Wilson ultimately finished with 24 points, her efforts proved to be futile as Seattle buried the Aces under a barrage of three-pointers.

As great as the defending WNBA champions looked, fans would be wise to recall the team’s start to the 2018 season. The Storm fell to the Phoenix Mercury in their opener before earning a 16-point win three days later en route to standing tall at the end of the year.

Saturday was a reminder of why Seattle could potentially lift another title despite losing Natasha Howard and Alysha Clark in the offseason. The discourse could shift a bit if the Aces bounce back with a comprehensive win Tuesday. Here are some storylines to watch.

END_OF_DOCUMENT_TOKEN_TO_BE_REPLACED

Tiger Woods won the 1997 Masters by the largest margin ever less than a year after becoming a professional. Later that season, he was victorious in the Byron Nelson Classic. He was 21 and poised to dominate the PGA Tour.

Instead, Woods decided to totally revamp his golf swing. While that meant taking a step backward in the short term as he figured things out, it laid the groundwork for one of the most dominant stretches in the sport’s history. By tweaking his swing to emphasize control over power, Woods perfected his game and ensured he would continue to stay miles ahead of the competition. If he doesn’t think proactively, then the Tiger Slam probably never happens.

Having already lost Alysha Clark to free agency, Seattle traded Natasha Howard to the New York Liberty for the No. 1 pick in the 2021 WNBA draft, the Phoenix Mercury’s 2022 first-rounder and the Liberty’s 2022 second-rounder. The Storm flipped the No. 1 pick to the Dallas Wings for Katie Lou Samuelson and a 2022 second-rounder while simultaneously sending the Phoenix pick to the Minnesota Lynx for Mikiah Herbert Harrigan. Sami Whitcomb also went to the Liberty in a sign-and-trade for the rights to Stephanie Talbot.

END_OF_DOCUMENT_TOKEN_TO_BE_REPLACED

The Seattle Storm hanged on to beat the Atlanta Dream 93-92 on Thursday night, and one rookie has the WNBA abuzz coming out of the game.

Yes, Ezi Magbegor hit the first three-pointer of her WNBA career, leaving her only 1,116 short of breaking Diana Taurasi’s all-time record. With as quickly as Ezi is progressing, don’t be surprised if she surpasses that mark by her fourth season.

Breanna Stewart had a team-high 27 points and eight rebounds in the victory, while Jewell Loyd chipped in 20 points in what was a shaky shooting night.

The Storm simply didn’t have a solution for Chennedy Carter, who finished with 35 points. The Dream guard is undoubtedly the favorite to finish runner-up to Ezi in the 2020 Rookie of the Year race.

END_OF_DOCUMENT_TOKEN_TO_BE_REPLACED

The Seattle Storm improved to 2-0 with a comprehensive 90-66 win over the Minnesota Lynx.

Breanna Stewart posted her first double-double (18 points, 10 rebounds) of the young season. Sue Bird (16 points) was the only other player to score in double figures. Everybody who saw the court for Seattle made at least one field goal to underscore what was a balanced offensive showing.

The Lynx didn’t have that luxury, partially due to injuries. Karima Christmas-Kelly (ankle) and Lexie Brown (head) both left the game before it concluded.

Napheesa Collier, Damiris Dantas and Sylvia Fowles combined for 44 points, but Minnesota’s support beyond that was lacking.

END_OF_DOCUMENT_TOKEN_TO_BE_REPLACED

The Seattle Storm opened the 2020 WNBA season with an 87-71 victory over the New York Liberty on Saturday.

Breanna Stewart and Sue Bird returned to the starting lineup after missing all of 2019. The WNBA also welcomed one of the most heavily hyped rookies in recent memory: Ezi Magbegor. Morgan Tuck’s Storm debut will have to wait as a knee injury kept her on the bench for the entirety of the 40 minutes.

In what might become the norm for her given her supporting cast, Sabrina Ionescu filled up the stat sheet but had a day to forget in her WNBA introduction. The Liberty as a team shot 34.8 percent from the field and 21.4 percent from beyond the arc.

END_OF_DOCUMENT_TOKEN_TO_BE_REPLACED

While the WNBA offseason is far from over, the biggest dominoes appear to have fallen ahead of the draft in April.

Once again, the Storm have opted for a more subdued approach, an understandable strategy with Breanna Stewart and Sue Bird back from season-ending injuries. In addition, Seattle had few roster spots available, with Courtney Paris, Blake Dietrick and Shavonte Zellous the team’s only free agents.

Let’s take a look at what has happened so far and what general manager Alisha Valavanis might still have up her sleeve.

END_OF_DOCUMENT_TOKEN_TO_BE_REPLACED

The Seattle Storm are going to the 2018 WNBA Finals.

Seattle defeated the Phoenix Mercury 94-84 in Game 5 of the WNBA semifinals, outscoring the Mercury 35-21 in the fourth quarter, on Tuesday night in KeyArena.

Per usual, Breanna Stewart led the way with 28 points and seven rebounds. For long stretches, Stewart was single-handedly keeping the Storm afloat on offense as the team struggled with Phoenix’s suffocating defense.

Sue Bird was the big star, though, finishing with 22 points, including 14 in the final frame. Bird gave the Storm a 79-76 lead with 4:01 remaining, and her three-pointer with 2:51 left to put Seattle ahead by eight was essentially the death blow for the Mercury.

END_OF_DOCUMENT_TOKEN_TO_BE_REPLACED 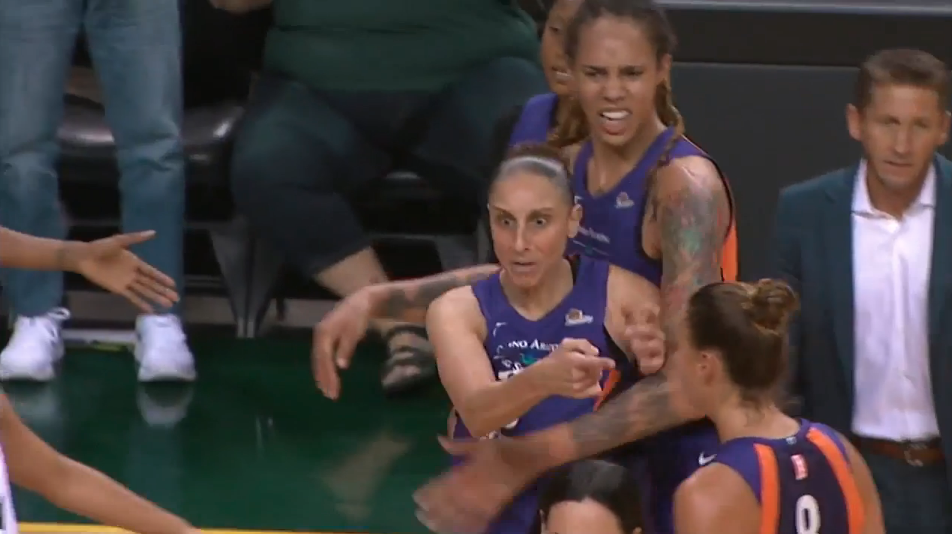 The Seattle Storm drew first blood in their 2018 WNBA playoff semifinal series against the Phoenix Mercury on Sunday at KeyArena in Seattle.

Hours after she was named the 2018 WNBA MVP, Breanna Stewart scored 28 points to lead all players. She was particularly deadly from beyond the arc, hitting six of her nine three-pointers.

Jewell Loyd also had 23 points, thus making Seattle 11-0 this season when she eclipses the 20-point mark. Like Stewart, Natasha Howard commemorated her Most Improved Player Award with a big game, scoring 20 points and collecting five rebounds.

For the Mercury, DeWanna Bonner and Diana Taurasi scored 27 and 25 points apiece, but Brittney Griner battled foul trouble for much of the game, thus limiting her impact on the floor. She finished with 13 points and four rebounds.

Game 2 is scheduled for Tuesday at 10 p.m. ET in Seattle.

END_OF_DOCUMENT_TOKEN_TO_BE_REPLACED

The Seattle Storm maintained a two-game lead on the Atlanta Dream with an 81-72 win over the Minnesota Lynx on Sunday in Minneapolis.

Natasha Howard relished the opportunity to once again embarrass her old team. She led the Storm with 21 points on 9-of-10 shooting. Breanna Stewart had 17 points and a season-high 17 rebounds, which also tied her career high.

The Lynx own the fourth-best defensive rating in the WNBA (99.0), but the Storm shot 47.1 percent from the field as a team and were 11-of-25 on three-pointers.

It was another big win for Seattle as it looks to lock down the No. 1 seed in the WNBA playoffs.