Since the Seattle Storm’s reboot truly commenced in 2015, no player has been more confounding than Jewell Loyd.

In some sense, Loyd is a microcosm for the Storm as a whole over the last three years; the results have been promising, but at the same time you can’t help but feel there’s a boatload of potential we’ve yet to see materialize.

While last year represented some level of progress for Loyd, she failed to address a few issues about her game.

Her turnovers climbed slightly from 2.2 to 2.5 per game, and Storm fans have likely tried to forget when Loyd had 12 turnovers in Seattle’s first two games without Sue Bird. The increase in turnovers was a little more troublesome considering Loyd’s assist total only rose by two, from 115 in 2016 to 117 in 2017.

Still, Loyd was an effective offensive presence overall. She ranked in the 75th percentile in offensive points per possession (0.948), according to Synergy Sports. A big chunk of that improvement was due to her three-point shooting. She had been a 27.8 percent three-point shooter through her first two seasons, so getting that number into the high 30s makes a big difference. Loyd had a .614 adjusted field-goal percentage on spot-up shots and a .542 adjusted field-goal percentage coming off screens, per Synergy.

The problem with Loyd is that she’s a very good scorer rather than a great one, which is an important distinction when comes to her truly breaking through to the next tier of WNBA stars. When she has limited value as an offensive rebounder and an uninspiring assist-to-turnover ratio, she needs to be a hyper-efficient scorer in order to reach that All-WNBA status.

The Storm’s bad defense wasn’t isolated to just Loyd, but she certainly had a role in Seattle finishing with the fourth-worst defensive rating (104.7) in the WNBA.

For Loyd, playing alongside Breanna Stewart can be a double-edged sword. Sure, it’s great to have somebody like Stewart on your team, but Stewart also serves as a measuring stick for Loyd to some extent. It’s one thing to compare Loyd with young stars on other teams; it’s another when the WNBA’s brightest young star is setting the league ablaze right there next to Loyd.

Stewart was a revelation when she entered the WNBA, averaging 18.3 points, 9.3 rebounds and 1.9 blocks per game. Since 1998, only five rookies had a higher win shares than Stewart’s 5.5: Elena Delle Donne, Candace Parker, Nneka Ogwumike, Tamika Catchings and Yolanda Griffith. That’s five MVPs and three of the WNBA’s 20 best players ever.

In last year’s preseason general manager survey, Stewart earned the most responses (four) when GMs were asked about the one player around whom they’d build their franchise.

Fairly or unfairly, it’s hard not to look at Stewart’s success and wonder when Loyd will have that kind of breakthrough. And the longer Loyd goes without having that breakthrough, the less likely it is to ever happen.

Loyd is already a bit behind the pace set by the best players in the league.

Since 2008, 44 different players have finished a season in the top 10 in win shares. Of those 44 players, only Stewart, Jonquel Jones and Chiney Ogwumike have played fewer than three years.

So excluding Stewart, Jones and Ogwumike, here’s how Loyd stacks up with the other 41 players in terms of total win shares and average PER through the first three years of their WNBA careers: 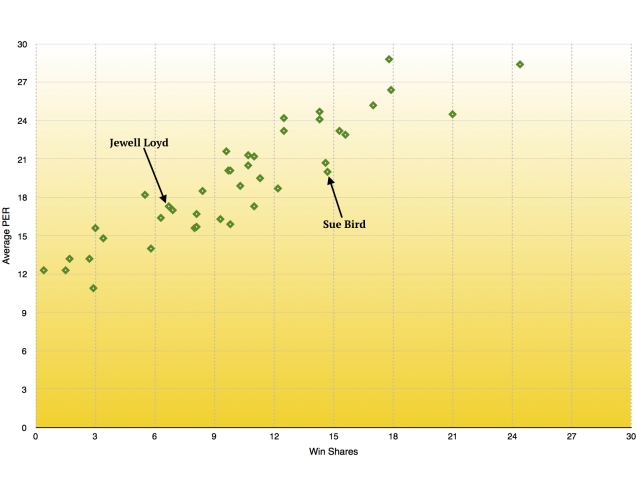 Loyd isn’t necessarily an outlier, but she’s clearly well back from the truly elite elite talents of the last decade (Delle Donne, Maya Moore, Lauren Jackson, Tamika Catchings, etc.). She’s also lagging noticeably behind Bird. In terms of pure numbers, Loyd ranks 31st in that group in win shares (6.7) and ties for 25th in PER (17.3).

This isn’t to say Loyd has already hit her peak and won’t make the leap up into the category reserved for the likes of Moore, Delle Donne, Jackson and Stewart. At the same time, it might not be a bad idea to start being more realistic about Loyd’s overall projection. Odds are, Loyd is more likely to be the next Kristi Toliver than the next Cappie Pondexter.

The 2017 version of Loyd certainly looks a lot like Toliver—or at least a slight upgrade over Toliver. Here’s a comparison of the two, using Loyd’s numbers from last season and Toliver’s career averages:

Plenty of WNBA teams would love to have a 24-year-old Toliver clone—the Storm included. But if that were the extent of Loyd’s contributions, it would likely necessitate Seattle recalibrating how it looks at the future. It would also change the on-court dynamic between Stewart and Loyd. Rather than viewing Stewart and Loyd as a 1A/1B partnership, Stewart would be the clear No. 1 option in the offense.

That would then have a knock-on effect for the Storm’s team-building. Loyd becomes a little more expendable in trade talks if she’s not consistently a top-10 player in the WNBA. The Summitt’s Howard Megdal reported last April the San Antonio Stars were discussing a potential deal that would’ve sent Loyd to the Stars and resulted in Seattle acquiring the No. 1 pick in the 2017 draft. Granted, there was no indication the Storm were actually close to trading Loyd.

Still, the fact the Stars inquired about Loyd’s availability would seemingly fuel the perception she isn’t untouchable.

Of course, there’s still a chance Loyd takes another step in 2018 and asserts herself among the WNBA’s best players, thus rendering much of the consternation about her and the Storm’s future moot.

She has improved incrementally over each of her first three seasons, with her three-point shooting the most obvious area of progress. If that trend continues, then an All-Star Game appearance is well within reach for Loyd.

The Storm looked lost on defense at times in 2017, and that was never more evident than when Seattle was defending the pick and roll. The Storm were last in the WNBA in defensive PPP against the pick and roll (0.862), and opposing teams shot 44.2 percent from the field when running that offense against Seattle, according to Synergy.

Loyd may have been a liability against the pick and roll, but she wasn’t alone in that distinction among the Storm players. Plus, Loyd had been better in those situations in her first two years, ranking in the 49th and 53rd percentiles, respectively, in defensive PPP.

It seems fair to chalk some of her struggles in 2017 up to Boucek’s coaching, so having a new voice in Dan Hughes could be a big boost.

Be it good or bad, the 2018 season should give the biggest indication yet as to Loyd’s ceiling in the WNBA.