As if the Seattle Storm hadn’t already indicated this offseason they want to make a deep playoff run in 2018, they acquired Natasha Howard on Wednesday in a trade with the Minnesota Lynx.

“We are excited to welcome Natasha to the Storm family,” head coach Dan Hughes said in a statement about the trade on the Storm’s website. “She brings a very athletic, mobile interior package; she runs the floor, actively rebounds, is a dynamic scorer and athletic defender. Natasha has continued to develop her skills on a Minnesota team that defined success in the WNBA over the past few years and is ready for the opportunity to be a successful part of our future.”

The simple act of trading for a role player who helped win the Lynx win a title in 2017 shows where Seattle’s priorities lie ahead of the upcoming season. One aspect of the deal in particular distilled how confident the coaching staff and front office is. In addition to giving Minnesota a 2018 second-round pick, the Lynx will have the opportunity to swap first-rounders with the Storm in 2019.

We’ll look at the implications of that in a little bit.

There’s no question Howard’s presence will address what was a big issue for the Storm last season. Their frontcourt productivity fell off a cliff when Crystal Langhorne or Breanna Stewart was off the floor.

Now, Seattle can bring Howard and Courtney Paris off the bench. Even accounting for the fact Jenny Boucek misused Carolyn Swords last year and failed to get the most out of her, the Storm’s bench is much deeper in 2018.

Along with that, the Storm were the second-worst rebounding team in the WNBA, averaging 31.0 boards per game. Paris has been a historically great rebounder when she’s on the floor, while Howard can effectively crash the glass as well. Together, they demonstrably improve Seattle’s rebounding.

Howard is coming off what was her second season in Minnesota. She averaged 4.3 points and 2.4 rebounds, which belie how effective she was when she was on the court because she only played 11.7 minutes a night. She put up 13.3 points and 7.3 rebounds per 36 minutes.

The 26-year-old also represents a nice contrast from Paris, thus allowing Hughes the opportunity to slow down or speed up the tempo depending on the situation. Paris operates better with a slower pace, whereas Howard can run the floor when Hughes wants the Storm to get out in transition.

Whereas it looked like signing Aleksandra Crvendakic to a training-camp contract was the Storm’s reaction to Ramu Tokashiki sitting out the 2018 season, Howard appears to be Tokashiki’s replacement.

All things considered, Howard is a sensible addition—albeit at a potentially high cost. This somewhat resembles the Storm sending a first-round pick to the Washington Mystics for Swords last offseason. It’s a lot to pay for a player who helps Seattle but likely won’t single-handedly put the team ahead of the serious title contenders.

Unlike the Swords trade, the Storm still have a first-round pick in 2019, so that provides some cover. The pick swap means Seattle could still lose a lot of value in next year’s draft.

Barring an injury to a key player, the Lynx are likely to remain near the top of the WNBA standings by the end of the 2018 season. The pick swap won’t be a huge problem if the Storm land somewhere near the middle of the pack in the WNBA.

If last year proved anything, though, it was that Seattle can’t assume anything about the future. ESPN.com’s Mechelle Voepel and WNBA.com’s Brian Martin ranked the Storm fifth in their preseason power rankings. Seattle proceeded to win one fewer game than it did in 2016 and fired Boucek in the middle of the season.

A deep playoff run would’ve been preferable to selecting fifth overall, but the silver lining was that the Storm could turn around and select a real difference-maker in the 2018 draft. That not only helps Seattle in the short term but also gives the team a young, cost-controlled asset for the future.

Now, imagine if the Storm finished eighth and then had to turn around and move back to 12th in the draft. That’s exactly what could happen in 2019. Sure, it’s the worst-case scenario, but it’s at least on the table as a possibility.

Just as in any other sport, the WNBA draft is very top-heavy. That statement alone, though, doesn’t put into context just how little the No. 12 pick—or anything in the back half of the first round—has historically returned.

Here are the average player efficiency ratings, win shares and win shares per 48 minutes over the first three years for players selected in the first round. 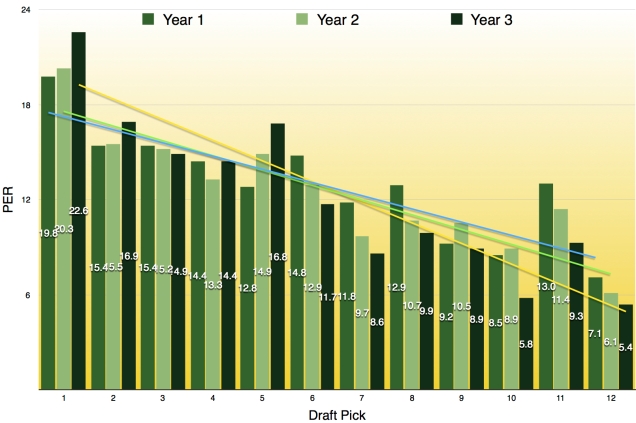 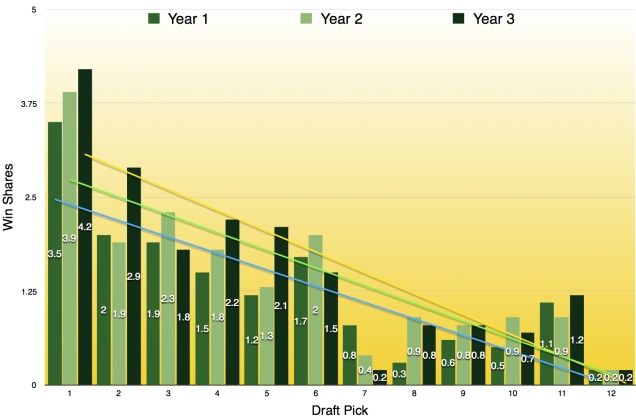 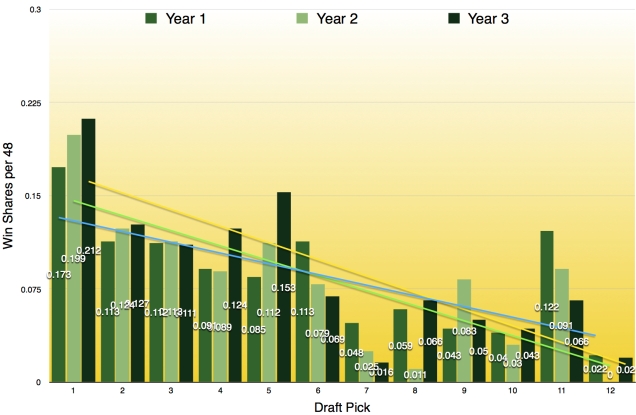 The win shares metrics are the best indicators of the diminishing returns the later you get into the draft. A player can have a high PER, but that doesn’t really say anything if she’s only getting a handful of minutes every game or only playing in garbage time.

That’s why the Lynx could come out really well from this trade. Minnesota dealt away a player who presumably wasn’t a big part of the team’s future—Howard is a restricted free agent—and received a second-pick and the chance to significantly improve its draft position.

On paper, Howard makes the Storm better, and if everything goes according to plan, Seattle will have basically gotten her for a second-round pick—given the relatively small return on investment between picks No. 6 through 12.

A year from now, we could just as easily lament what was another one-sided trade in which the Storm came out a loser.