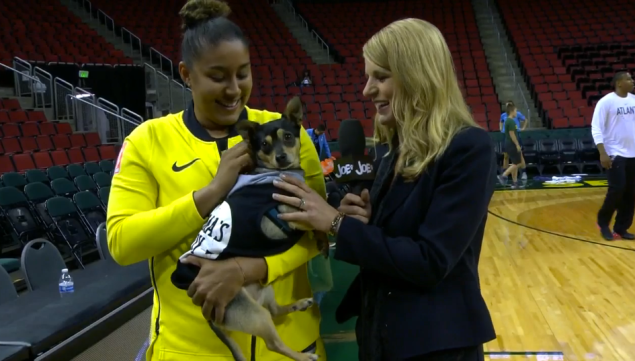 The 2018 season was the perfect antidote for Kaleena Mosqueda-Lewis following a 2017 campaign in which she battled both a knee injury and erratic playing time.

Kaleena Mosqueda-Lewis By the Numbers

Since You’ve Been Gone

With the passage of time, it looks even more like Jenny Boucek simply didn’t favor Mosqueda-Lewis—for whatever reason.

Under Dan Hughes, Mosqueda-Lewis started four games—compared to one start through her first three years—and played a career-high 442 minutes. She also played at least 15 minutes in 12 of her 33 appearances, up from three times in 18 games in 2017.

Mosqueda-Lewis appeared to find a comfort zone with Hughes at the helm. She shot 42.0 percent from three-point range—her previous best was 35.4 percent—and 41.2 percent from the field. The latter figure was a step backward from 2017 (45.6 percent), but that was largely a byproduct of Mosqueda-Lewis taking more of her shots from the perimeter. Her three-point attempt rate climbed from 50.0 percent to 54.7 percent, per Basketball Reference.

In July 2017, High Post Hoops’ Howard Megdal reported Boucek was on shaky ground amid a disappointing season from the Seattle Storm, with some players voicing their frustrations about the coaching:

“It doesn’t always look like we’re being coached to win,” according to one player, referencing a view that rotations are irregular, a team slow to make tactical adjustments, and players are often left too long on the bench. “There’s too much talent here that isn’t competing.” […]

Another Storm player also pointed out the number of WNBA players who have gone on to success elsewhere after limited opportunities in Seattle, naming Renee Montgomery (now of the Minnesota Lynx) and Krystal Thomas (now of the Washington Mystics).

Boucek’s player development record was spotty over her nearly three seasons in charge of Seattle. While she could point to Jewell Loyd and Breanna Stewart’s early success in the WNBA as a sign her methods were working, Mosqueda-Lewis and Alysha Clark were stagnating and even going backward in some respects. Boucek did Mosqueda-Lewis no favors in particular by shifting her minutes around and playing her so infrequently.

In terms of her overall role, little changed for Mosqueda-Lewis with Hughes on the sideline. But Hughes clearly trusted her more than Boucek did, which allowed the fourth-year forward to build some confidence.

When she left Connecticut, Mosqueda-Lewis was the NCAA’s career leader in three-pointers. Ohio State’s Kelsey Mitchell has since broken that record.

Mosqueda-Lewis’ prodigious long-range shooting didn’t immediately carry over to the WNBA. Entering the 2018 season, she was a 32.0 percent shooter from beyond the arc.

Shooting isn’t her only transferable skill on the court, but it’s easily the biggest component of her game. If Mosqueda-Lewis can’t consistently knock down perimeter jumpers, keeping her in the lineup becomes a much more difficult proposition.

Luckily for both her and the Storm, the UConn version of Mosqueda-Lewis started showing up in 2018. She finished sixth in the WNBA in three-point percentage and was fourth on the Storm in made three-pointers (34).

Just as important, Mosqueda-Lewis learned how to be an effective scorer with limited time on the ball. The Storm are an uptempo team with no shortage of star power. Because of those two factors, KML not only must have a quick trigger, but Seattle also has to count on her to capitalize on her open chances.

Although there’s room for improvement, Mosqueda-Lewis was good enough in both areas to make her one of Seattle’s foremost three-point specialists.

Much like with Sami Whitcomb, the advanced metrics aren’t very flattering toward Mosqueda-Lewis. She had a 9.4 PER and a 0.1 net rating. The Storm don’t need her to do too much, though. Her 18.3 percent usage rate was the lowest of her career, per Basketball Reference.

And like Whitcomb, those numbers obscure Mosqueda-Lewis’ overall contributions. She did exactly what Hughes asked of her and did it well.

Mosqueda-Lewis will continue to be one of the first players off the bench for the Storm, and Hughes may deploy her with the first unit for stretches in order to maximize the team’s spacing. Considering she’s hitting nearly 50 percent of her threes (48.9) in the French league this season, she may be headed for another career year in 2019.