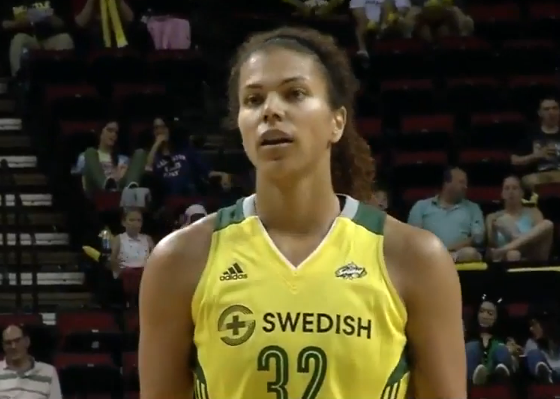 The Seattle Storm will be counting on improvement from Breanna Stewart and Jewell Loyd in order to become a top-four contender in the WNBA in 2018. However, no player will be a better indicator of the Storm’s progress than Alysha Clark.

Were basketball a three-player game, the Storm could stack up with almost any team in the WNBA. Stewart, Loyd and Sue Bird aren’t the league’s best trio, but there are few better. Look beyond that three and things get a little more dicey.

That’s why new Storm head coach Dan Hughes had me stop dead in my tracks as I was walking my dogs after I heard this on the Locked On Women’s Basketball podcast last month:

In particular, Hughes hit the nail on the head about Clark.

By any metric, the sixth-year forward wasn’t very good on the defensive end.

Her 103.8 defensive rating was second-worst on the team behind Bird, according to the Storm’s official website. Synergy Sports ranked her in the 35th percentile in defensive points per possession (0.928). Clark was noticeably bad in spot-up and isolation situations, where she ranked in the 26th percentile in each category.

Appreciating good defense in basketball can be difficult to do, but blown assignments are often obvious to even casual fans. There were far too many moments when Clark looked completely lost on defense, with the sequence below the gold standard.

One could argue Crystal Langhorne was more at fault for not getting out on the shooter quicker, but Clark didn’t cover herself in glory by seemingly having little idea as to what her assignment was supposed to be. Worth mentioning is that that three-pointer from Damiris Dantas gave the Atlanta Dream an overtime lead they didn’t relinquish.

Clark was more culpable for a back-breaking three-pointer two days earlier when Shavonte Zellous tied the game for the New York Liberty with 2:46 remaining. Zellous may only be a career 30.4 percent shooter from three-point territory, but she still couldn’t be left alone in the corner when the Storm are holding onto a three-point advantage. Not to mention, Ramu Tokashiki was well positioned inside to provide any help defense, which it appeared Clark was trying to do by gravitating toward the paint.

Clark’s defensive lapses are all the more frustrating because her physical gifts can make her the Storm’s most versatile and valuable defender.

Clark is the only player on Seattle’s roster who could hypothetically guard positions 1 through 4. She’s primarily used as a small forward, but she has the speed and agility to keep up with most guards. And at 5’11”, she could feasibly guard power forwards when opponents go to smaller lineups.

Not even Stewart can match that kind of flexibility, since she’ll likely be limited to either power forward or center for the majority of games.

In effect, Clark could be the Storm’s version of Seimone Augustus or 2017 Defensive Player of the Year Alana Beard. Clark could rotate through a variety of positions depending on the personnel on the floor and the game situation.

For as much as the Storm need a rim protector, the absence of a defender who can guard the perimeter is just as glaring. Clark could fill that void.

On the offensive end, Clark’s services could be equally as vital.

Last year, the trio of Stewart, Loyd and Langhorne combined to average 50.0 points per game, which was 60.6 percent of the team’s overall scoring (82.6 points per game). Among the eight WNBA playoff teams, only the Phoenix Mercury had a higher volume of their overall scoring come from their top three scorers.

The Storm are a top-heavy team, and top-heavy teams tend to get exposed in the postseason. Also consider Seattle is still counting on the 37-year-old Bird to score in double figures on a nightly basis. Somebody outside of the Storm’s top four scorers needs to step up in 2018.

Clark averaged 8.2 points per game in 2017. That number could easily creep into double figures in 2018 with a few changes.

For one, Clark shot 32.8 percent from beyond the arc, which was the second-worst of her career. Her 13.1 usage rate was also second lowest on the Storm, according to WNBA.com.

Imagine if Clark climbs closer to her career average on three-pointers (35.0 percent) and Hughes gets her more involved in the offense.

Clark’s 1.050 points per offensive possession ranked 11th in the WNBA among players with at least 50 possessions in 2017, according to Synergy Sports. She was in the 77th percentile in spot-up situations and in the 92nd percentile on post-ups.

Clark isn’t a dead-eye shooter, nor is she an elite post scorer. However, she’s good enough in the paint and on the perimeter to pose a consistent threat to opposing teams. Especially with opponents focusing largely on Loyd and Stewart, Clark can exploit gaps or mismatches in the defense.

Hughes could even use Stewart as a decoy, to the extent she’s running out on the three-point line and dragging centers out of the paint, thus freeing up space inside for Clark.

The 30-year-old is somewhat underrated as a post scorer. Much of her success is down to her ability to seal off the defender.

The thing with Clark is that she seems like the perfect example of a player who could benefit from the right coaching.

Her struggles on defense aren’t through a lack of effort. If anything, she’s overzealous in her attempts to make a play and runs herself out of position. Clark just needs somebody who can help hone her defensive instincts, which makes Hughes singling her out so encouraging. He’s clearly watched enough Storm games to identify not only her issues but also how important she can be in the grand scheme of things

And offensively, Clark could benefit from a few more touches. That may be somewhat difficult when she’s out with the first unit, since Stewart, Loyd and Bird are going to have the lion’s share of possession. Throwing out lineups where Clark is the second or third scoring option is where Hughes could maximize her impact.

The Storm’s title hopes in 2018 won’t necessarily hinge on the performances of Stewart and Loyd but rather those of the supporting cast.

As good as Sylvia Fowles and Maya Moore are, role players such as Rebekkah Brunson, Renee Montgomery and Lindsay Whalen are a significant reason why the Minnesota Lynx won a WNBA title. Until Seattle can count on consistent production outside of Stewart and Loyd, the team will be unable to improve upon its early playoff exits the last two years.

And in that respect, there may be no better indicator as to the Storm’s overall progress than Clark’s contributions.